On the second floor balcony of the Fredericton Region Museum, a young girl from colonial times serves iced tea and cookies. Spencer Murgatroyd dresses in period costume as Hannah Ingraham, a woman of Loyalist descent who arrived in Fredericton from New York State in 1783 at the age of 11. She was a refugee, escaping political persecution after the American Revolution.

American rebels arrested Hannah’s father because of his loyalty to Britain during the American Revolution. He escaped into the forest where he joined other partisans and eventually joined the King’ Army. During his absence, rebels stripped Hannah and her mother of their farm, leaving them with a few sheep and a cow. They remained on their now confiscated farm, but were forced to pay rent. After the war ended in the United States, the family continued to suffer persecution, they, therefore, decided to flee Albany for Saint John, New Bruswick, then called the colony of Nova Scotia.

Near the end of their journey, the family faced a troubling storm in the Bay of Fundy. Thankfully some “Frenchmen” (MacLeod 4) in a canoe came to their aid. After arriving in Saint John in October of 1983, Hannah and her parents were given mattresses and a tent in which they camped on the banks of the St. John River. Conditions were far from comfortable as snow and rain fell upon the land soaking clothing and mattresses. The Ingrahams eventually travelled up the river and settled in St. Ann’s, later named Fredericton. Hannah, never married and therefore remained with her parents until the death of her father in 1810. She then moved to Bear Island, a community northwest of the city of Fredericton, in order to live with her brother, Ira. Ira Ingraham’s house was moved from Bear Island to King’s Landing Historical Settlement.

Come on out and meet Hannah Ingraham at Hannah’s Tea Place, located on our 2nd floor balcony overlooking Officers’ Square. Hours of operation are Mon-Tues 1pm-4pm and Thurs – Fri. 1pm-4pm. 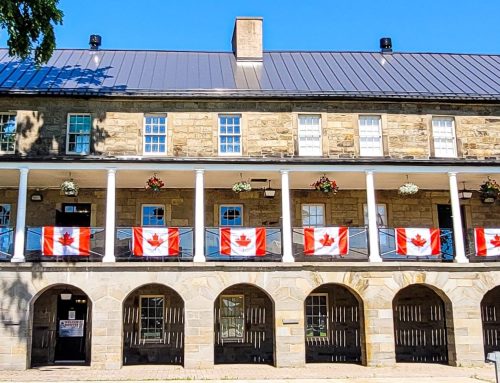