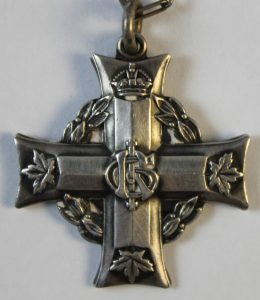 The Memorial Cross given to James Stickels’ mother after he was killed in action on October 9, 1916.

As part of our 2022 Remembrance Day activities, the Fredericton Region Museum is commemorating the life of James Edward Stickels. We have two artefacts that are attributed to him in our collection. The first is the Memorial Cross (at right) that was given to his mother. The second is his pocket diary (below right) that runs from 1 January 1916 to 6 October 1916, just three days before his death.

James Stickels was born on 31 December 1897 at St. Mary’s, York County, New Brunswick. He was the son of James W. and Rebecca (Long) Stickles. There were five children in the family – two boys and three girls. He was a member of the Church of England and listed his civilian trade as a clerk.

He must have been keen to join the war effort as, on 5 August 1915 at the age of 17, he enlisted in the Composite Battalion in Halifax, Nova Scotia. This unit had been formed to provide the garrison for Halifax after the Royal Canadian Regiment was sent to Bermuda. A little over six months later, he enrolled in the Canadian Expeditionary Force on 27 March 1916. He left Halifax on 28 June 1916 on board the SS Olympic and arrived at Liverpool on 6 July. From there, he went directly to the Royal Canadian Regiment and Princess Patricia’s Canadian Light Infantry Depot at Caesars Camp, Folkstone. A month and a half later, on 27 August, he left England for France and arrived at Havre the next day. He spent less than a month with the 3rd Entrenching Battalion where he completed his training. Then, on 23 September, he arrived at his unit, the Royal Canadian Regiment.

The Battle of the Somme lasted from 1 July to 18 November 1916. It was a blood bath! There were 618,257 Allied casualties and 434,500 German ones. This included 24, 029 Canadians. The Canadian Corps entered the battle in early September. By early October, the Canadian part of the battle had focused the Ancre Heights and a feature called the “Regina Trench”. The 7th Brigade, that included the Royal Canadian Regiment, was ordered to attack Regina Trench on 8 October. Despite initial successes, the regiment had to draw back as the flanking units had not met their objectives. Of the 432 who had been in the attack, only 140 remained standing. The others were either missing, wounded or killed. Private James Stickels was among the latter. He had suffered a gunshot wound to the abdomen and died the following day at the 49th Casualty Clearing Station. He is buried in the Contay British Cemetery in France. His parents must have been proud of him as they had the following inscription placed on his headstone – “He Fell at the Somme. It is His Immortal Honor”. He was only 18 years and 9 months old. 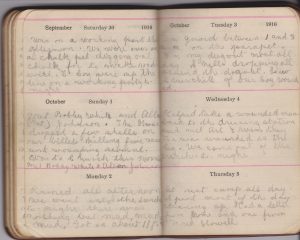 His diary provides an interesting insight to garrison life in Halifax. In addition to the expected guard duties, drills and inspections, it relates his off-duty life. He enjoyed going down town with his friends and having meals at the Khaki Club. Hockey occupied much of his time. There was an Army City Hockey League and he played centre for the Composite team. Despite practicing frequently, they were “trimmed” on a regular basis by the other teams. Things improved as the warmer weather arrived and they moved into baseball.

Once he had enlisted in the CEF, the pace of life picked up. There were kit issues, route marches and more parades as they were readied for deployment overseas. Once in England, the tempo of training picked up even more as they were readied for France. Route marches, digging trenches and musketry were the order of the day. Once in France, the training continued with emphasis on shooting, gas warfare, hygiene and trench routines. Having arrived at his unit, he described the daily duties of working parties, helping with casualty evacuations and standing guard on the parapets. The diary ends on 6 October 1916 when they were in a rest camp in preparation for the attack on the Regina Trench. He wrote in a straight forward, factual narrative style. His last entries gave no hint of the forthcoming operation. His diary provides valuable information about a soldier’s life during the war. It is a treasured artefact.

It is sad that the Fredericton Region Museum only has these two artefacts with which to remember James Stickels. His medals (the British War Medal and the Victory Medal), Memorial Plaque and Scroll were sent to his father in 1922. His Memorial Cross was sent to his mother two years earlier in 1920. It would be wonderful to be able to reunite all of these items as a tribute to his short life. Lest We Forget.