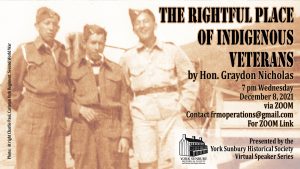 This LIVE event is FREE and will be held via ZOOM at 7 pm on Wednesday, December 8, 2021. The presentation will be recorded and made available online after the event. Contact us for the ZOOM Link at frmoperations@gmail.com

New Brunswick’s Indigenous community has a proud and valorous, but often overlooked military history. As a former officer in the Canadian Armed Forces who grew up on Tobique First Nation (Neqotkuk) in the wake of the Second World War, Graydon Nicholas brings a unique perspective to this important chapter in New Brunswick’s Indigenous and military history.

The Honourable Graydon Nicholas was the 30th Lieutenant Governor of New Brunswick from 2009 to 2014, becoming the first Aboriginal person to hold this office. Born in 1946, he earned a Bachelor of Science degree from St. Francis Xavier University in 1968, a law degree from UNB Law School in 1971 and a Master of Social Work degree from Wilfred Laurier University in 1974.
Graydon Nicholas worked with the Union of NB Indians as legal counsel, Chairman of the Board and President of the Union of New Brunswick Indians from 1974-1988. He was Chair of Native Studies at St. Thomas University from 1989-1991 and was appointed to the Endowed Chair of Native Studies from 2015 to 2021. From 1991-2009 he was a Provincial Court Judge.

Among his many honours, Graydon Nicholas is a recipient of the Order of New Brunswick and the Order of Canada. He received four honorary degrees from St. Francis Xavier University (1994), WLU (2002), Mount Allison University (2010) and UNB (2015). In 2019, he was appointed an Honorary Colonel for the 3rd Field Regiment (Loyal) on June 20, 2019, for a three-year term.