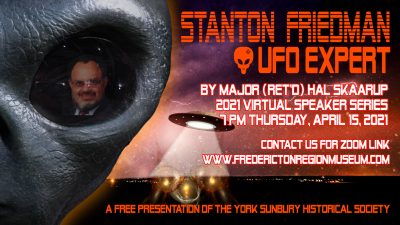 7 pm, Thursday, April 15, 2021 VIA ZOOM
Contact us for the ZOOM Link at frederictonregionmuseum@gmail.com.

This LIVE event is FREE and will be held via ZOOM at 7 pm on Thursday, April 15, 2021. The presentation will be recorded and made available online after the event.

Hal Skaarup, BFA, MA, CD, served as an Army Intelligence Officer with the Canadian Forces (CF) for 40 years, retiring in 2011. An accomplished author specializing in military history, he currently serves as the Vice-Chair of the Fredericton Region Museum.

The late Stanton Friedman was a noted nuclear physicist and internationally recognized as the world’s most famous ufologist. He was a leading authority on unidentified flying objects, alien abductions and the Roswell incident, considered by many to be the definitive UFO event. Stanton said his belief in extraterrestrials was based on his research into data about UFO events he found buried in U.S. government documents.

Stanton carried out detailed research and on-site investigations into the subject of UFOs and alien life forms, physically visiting archives and meeting with contactees. He was interviewed for numerous documentaries on radio and television and gave presentations on UFOs for hundreds of colleges and professional groups around the world. He was inducted into the UFO Hall of Fame in Roswell, New Mexico, and his work was celebrated by the City of Fredericton when it declared August 27, 2007, Stanton Friedman Day.