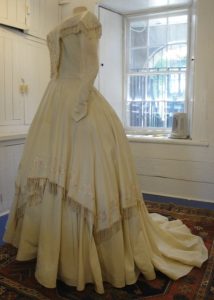 This dress belonged to prominent Fredericton-born opera singer Exa Marie Chavannes (née Lister), and was worn at her wedding to Swiss physicist and inventor Marc Chavannes. Marie, as she was known, was born and grew up in Fredericton, where her father, Dr. G. H. Lister, was a prominent Dentist. Marie left Fredericton to attend Ohio’s Oberlin College in her young adulthood, where she refined her vocal and performance skills. She was later married to Chavannes in Fredericton, she at thirty and he fifty-three. Soon afterward the couple moved to New York, where they each became local notables in their own respect: Marie gave a series of much-lauded performances in New York City, where she founded the Chavannes Ensemble, a group who toured and recorded a wide repertoire of classical music; Marc Chavannes would go on to invent and patent “Bubble Wrap” in 1957 with fellow physicist and engineer Henry Fielding. While the couple eventually retired to Sarasota, Florida, they remained attached to their New Brunswick origins, owning a cottage at nearby Grand Lake.