Stanton Friedman Is Out Of This World Exhibit 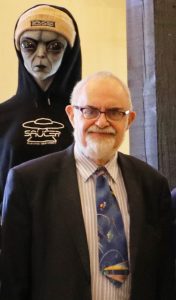 Fredericton native Stanton Friedman was a noted nuclear physicist and well-known ufologist.  He was a leading authority on unidentified flying objects, alien abductions and the Roswell incident, considered by many to be the definitive UFO event.  Stanton said his belief in extraterrestrials was based on his research into data about UFO events he found buried in American government documents.

Stanton first became interested in UFOs in 1958, and carried out detailed research and on-site investigations into the subject of UFOs and alien life forms, making sure to personally follow up with contactees to complement his archival research.  He began lecturing on the topic in 1967, but he never actually saw one himself. He was interviewed for numerous documentaries on radio and television and gave presentations on UFOs for hundreds of colleges and professional groups around the world, and was inducted into the UFO Hall of Fame in Roswell, New Mexico.

Major (Retired) Hal Skaarup, member of the board of the Fredericton Region Museum and personal friend of Stanton Friedman, is the guest curator of this exhibit. You can find his lecture on the topic of Mr. Friedman’s research on our youtube channel here:

Stanton investigated the 1961 UFO abduction of Betty and Barney Hill, a New Hampshire couple who claimed to have been taken aboard an alien spacecraft. Stanton joined with Betty’s niece Kathleen Marden to produce the book Captured! The Betty and Barney Hill UFO Experience: The True Story of the World’s First Documented Alien Abduction (Weiser, 2007).

The Hill story emphasised the character of the aliens, including their curiosity, their democratic discussions, and their desire to avoid inflicting pain.

While inside the spacecraft, Betty and Barney were physically examined, and one of the five humanoids they encountered communicated with to Betty. Betty noted that “it was uncomfortably cold in the ship”. After the examination she asked him where they are from. In response he showed her a three-dimensional map with various sized dots and lines on it. The humanoid asked Betty if she knew where she was on map number 7. She didn’t know. After the examination, Betty and Barney were returned unharmed to their car. The humanoid told her that she would forget what happened.

J. Allen Hynek, chairman of the department of astronomy at Northwestern University, investigated this incident. Hynek described how the Hills recalled the details of their encounter in his book, The UFO Experience (Henry Regnery Company, 1972).

“Under repeated hypnosis they independently revealed what had supposedly happened. The two stories agreed in considerable detail, although neither Betty nor Barney was privy to what the other had said under hypnosis until much later. Under hypnosis they stated that they had been taken separately aboard the craft, treated well by the occupants — rather as humans might treat experimental animals — and then released after having been given the hypnotic suggestion that they would remember nothing of that particular experience. The method of their release supposedly accounted for the amnesia, which was apparently broken only by counterhypnosis.” 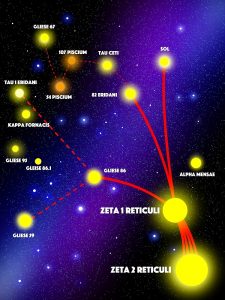 Zeta-Reticuli Star Map, based on the drawings of Betty Hill.

Betty Hill famously drew a star map from memory, in 1964, under psychoanalysis. The map supposedly showed the sky as seen from a planet orbiting the star Zeta Reticuli, from which the alien abductors had arrived.  Betty described the map as “three-dimensional, like looking through a window. The stars were tinted and glowed. The map material was flat and thin (not a model), and there were no noticeable lenticular lines like one of our three-dimensional processes.”

Betty estimated the map was “approximately three feet wide and two feet high with the pattern covering most of the map.” She was standing about three feet away from it. She said there were many other stars on the map but she only (apparently) was able to specifically recall the prominent ones connected by lines and a small distinctive triangle off to the left. There was no concentration of stars to indicate the Milky Way ( galactic plane) suggesting that if it represented reality, it probably only contained local stars. There were no grid lines.”  The Lines on the map, according to Betty Hill, were described by the alien as “trade routes” or “places visited occasionally” with the dotted lines as “expeditions”.

The two stars are known as Zeta 1 and Zeta 2 Reticuli, or together as simply Zeta Reticuli. They are each fifth magnitude stars, which are barely visible to the unaided eye, located in the obscure southern constellation Reticulum.

The map is derived from a model of our stellar neighborhood by Marjorie Fish, an Ohio schoolteacher, amateur astronomer and member of Mensa.  It shows the stars that coincide with those on the Hill map.  This map, prepared by Marjorie Fish, shows all the stars located in a vast volume of space extending out about 55 light-years in the direction of Zeta Reticulli. The viewing angle is from a point in space beyond that limit looking back toward the sun.  Marjorie Fish noted 16 stars whose positions are remarkably close to the stars in the drawing made by Betty Hill. 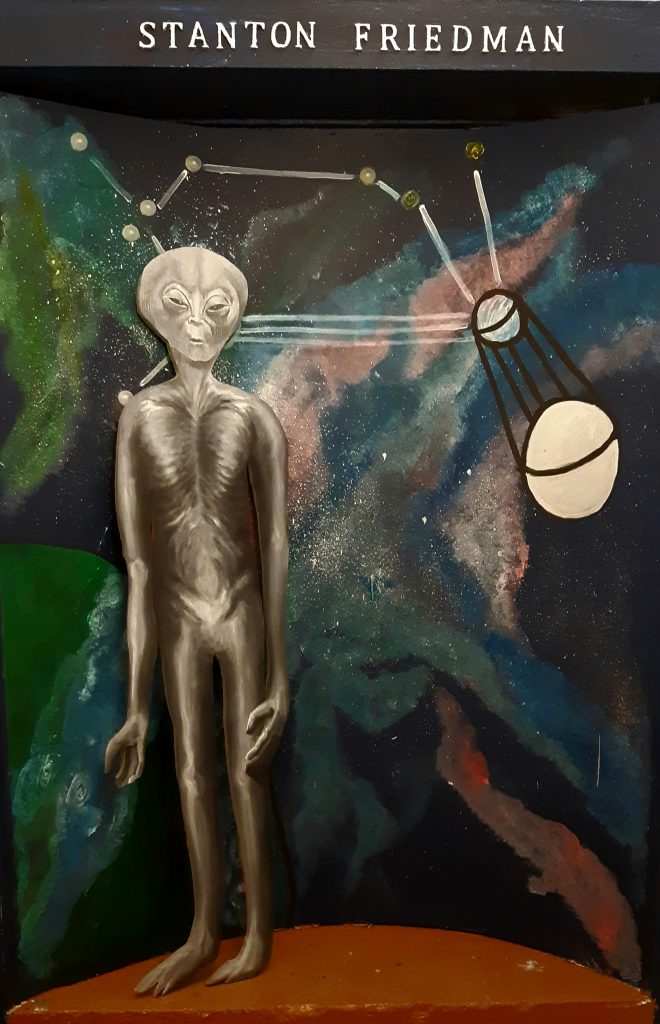 David R. Saunders, a statistics expert at the Industrial Relations Center of the University of Chicago, stated, “I can find no major point of quibble with Marjorie Fish’s interpretation of the Betty Hill map.”  By various lines of statistical reasoning he concludes that the chances of finding a match among 16 stars of a specific spectral type among the thousand-odd stars’ nearest the sun is “at least 1,000 to 1 against”.

For more on Stanton Friedman’s research, you can consult Maj. Hal Skaarup’s website. You can also consult Friedman’s extensive body of authored and co-authored published works here (all links to Amazon, in order of publication):

Crash at Corona: The U.S. Military Retrieval and Cover-Up of a UFO (Paraview Special Editions, 2004)

Fact, Fiction, and Flying Saucers: The Truth Behind the Misinformation, Distortion, and Derision by Debunkers, Government Agencies, and Conspiracy Conmen (New Page Books, 2016)