The history of the 1918 Flu Pandemic during the First World War and Fredericton’s Black heritage will be the focus of the Fredericton Region Museum’s 7th annual Artist-in-Residence program this summer.

Museum Executive Director, Melynda Jarratt, explains that artists were challenged to create works of art in any medium that reflect contemporary themes including COVID 19 and the Black Lives Matter movement within the context of Fredericton’s heritage. Submissions were judged by a panel of local artists including Karen Ruet, Photographer and instructor at the College of Craft and Design, Cathie LeBlanc, filmmaker and Membership Coordinator at the NB Film Cooperative, and Hal Skaarup, artist, historian and member of the Board of Directors of the York Sunbury Historical Society.

Jarratt invites the public to visit the museum from July 28 through to August 22 over the next four weeks to meet the artists including painter Ruby Allan, actor / musician Maria Bourgeois and assesmbly artist Rhonda Simmons.

Ruby Allan is a Fredericton-based visual artist. Ruby uses coloured pencils as her primary medium in the studio and oils for Plein Air paintings. In creating her concept for a COVID-19 themed visual art piece, Ruby did not have to look very far: her own grandmother died of the Spanish Flu in 1918. Ruby intends to connect stories such as the transportation of returning soldiers to Canada that led to the Spanish Flu outbreak in New Brunswick after the First World War to the role of migration and travel in today’s COVID 19.

You can find Ruby at the Fredericton Region Museum from July 28 to August 8, between the hours of 12pm and 4pm.

Maria Bourgeois is a Fredericton-based actor and aspiring musician with more than 20 years experience recreating New Brunswick womens’ history in theatre pieces that often include music. In this residency, Maria plans to turn her practise on its head and create music that has a theatrical component. Maria will write historically inspired music pieces based on real life persons featured in current and upcoming exhibits with a focus on the Spanish Flu during the First World War. She will also explore connections to Fredericton’s Black Heritage through music.

You can find Maria at the Fredericton Region Museum from July 28 to August 8, between the hours of 12pm and 4pm.

Rhonda Simmons is a Black-Canadian assembly artist with over 30 years experience making art. She recently returned to New Brunswick after more than 20 years living in Western Canada, the US and Mexico. Rhonda approaches this residency as a “Black Outsider” in the community where she grew up and at a time when a revolution is unfolding through the “Black Lives Matter” movement. Rhonda will create three free standing wood panels featuring layered and collaged mixed media focusing on Black Canadian Maritime persons of interest, their locations, statistics and historical facts. The back of the panels will incorporate activist / civil rights music that relate to front panels content.

You can find Rhonda at the Fredericton Region Museum from August 11 to August 22, between the hours of 12pm and 4pm.

The Fredericton Region Museum Artist-in-Residence program is made possible by an Arts, Culture and Heritage grant from the City of Fredericton and with the support of the York Sunbury Historical Society. 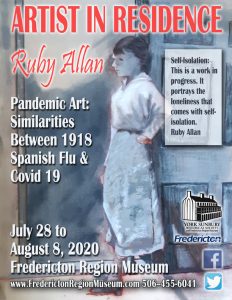 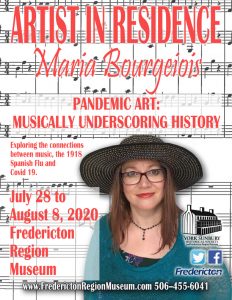 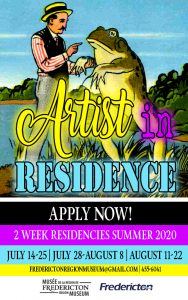